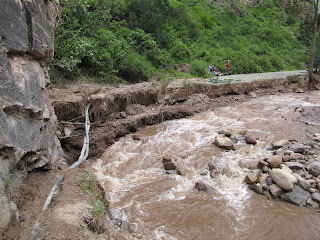 Now that we had secured a place for the dorm, we shifted our focus to community outreach and student selection. During this process we suffered our first missteps and learned some tough lessons. Our plan was to spread the word to three of the most distant and impoverished communities in the district. Our first trip was to the village of Socma. We had heard that the heavy rains had washed away parts of the dirt road that winds up to the small agricultural village, but we had no idea of the extent of the damage. Where there had once been a road wide enough for a 3 axel truck, there wasn’t even room for us to pass on foot. The detour lead us along a rocky ledge that even a sure footed Incan would think twice about before crossing. This was the first of many difficulties that we would encounter over the following 4 days.

Our plan was to call small community meetings in each village in order to learn as much as we could about the daughters’ situation for the upcoming school year. We found that, regardless of the physical or financial sacrifices that a high school education would require, most families were doing everything in their power to enroll their daughters in their first year. This came as a surprise and meant that we would have to re-evaluate the prerequisites that we had established for acceptance in the dorm. We had originally thought that we would accept girls that, because of the difficultly of getting to school, had abandoned the idea all together. We realized that ‘access’ to high school, as we had originally defined it, was not so clear. Many of the students had arranged to work in the houses or shops of relatives or family friends in exchange for a place to sleep, while others would make the daily journey of 2-3 hours each way. Either way, they jumped at the opportunity to live in the dorm. It did not take long for us to realize the error we had made. By spreading the word in such a public fashion, we had given hope to more students than we could possibly accommodate. We mentioned the limited resources of our first year and stressed that the dormitory would be for those with the greatest need. Given our limited knowledge of each family’s specific situation, we hoped that the community itself could decide which girls they would send to the dormitory based on individual needs. In retrospect, this was an ignorant and harmful presumption. As you would imagine, most families were not willing to concede their daughters’ spot so as to benefit someone else’s daughter. We asked those interested to come down to Ollantaytambo the next day to meet with us. 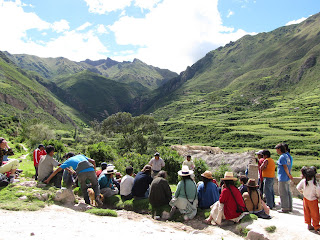 Yesterday, while Eli and Bianca traveled to Camicancha to fulfill the heart-wrenching task of telling a mother of four whose husband has fallen victim to the bottle that there was no space in the dorm for her daughter, I stayed behind with Max to wait on the families from Socma and Raftca who would be making the 2 hour trek down to meet with us. Three families arrived to petition for our remaining two spots. For three and a half hours we tried in vain to facilitate a productive dialogue. We met first with the group as a whole and when that failed, we broke off and spoke with the fathers and mothers separately. As we were still unable to make any progress, we tried meeting with every family individually in an attempt to assess for ourselves who was the most appropriate candidate for the dormitory. This put me in a very uncomfortable and inappropriate position of power that was amplified by centuries of imperialism and external oppression. We decided that in the end, because the family from Raftca had the most children in elementary school and seemed to be in the worst financial position, that we would accept their daughter and continue to try and reason with the two remaining families. We offered to help both families with the purchase of a school uniform and school supplies and stressed the difficulties of being a part of the dormitory, but that didn’t seem to persuade either of them. When left to their own devises, the two families decided that the only way to reach a conclusion was by lottery. This plan seemed extremely unjust, but after a brief protest I realized that there was no other option. We decided to flip a coin. It was the most painful and inappropriate thing that I have ever witnessed first hand. In the end I had to tell my goddaughter, the girl for whom I had originally planned this project, that there was no room for her in the dormitory. This painful lesson is one that will stick with me and the Sacred Valley Project, and one which will change the way we handle the selection process for years to come.