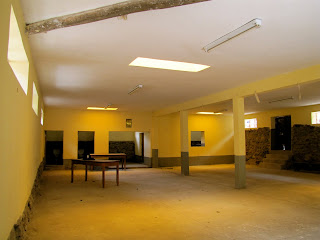 At two in the afternoon yesterday we exited the office of the Ollantaytambo town judge having just signed a two-year contract for the building that will become Yachay Wasi. That’s the name we’ve decided to call the dormitory. It means “Casa de Aprendisaje,” or “House of Learning,” in Quechua, the indigenous language spoken by the local population.

The building is perfect, but it needs a ton of work. It’s a big room with two bathrooms and a kitchen attached to it. There’s no shower, no oven, and though it’s wired, it has no electricity. It was built in 2008 as the communal dinning hall, though the community has used it only a couple of times a year for weddings and quinceñeras. Animals clearly come through the open windows and there’s a rat carcass in the kitchen. Nonetheless, it’s easy to imagine the place clean, with walls separating different rooms, and filled with stuff.

Getting the contract was only possible because Max Loayza arrived on Sunday. He’s the son of Juan Loayza, the President of the Campesina (indigenous) community of Ollantaytamba, and whose house we are staying at. Though Juan is president, it is clearly a family enterprise. Walking through town, Max stops to chat with almost everyone he passes. At the breakfast table this morning he had a clear plan for how we were going to get the contract. Since Juan is involved with the project, the vice-president was the one who had to sign the document, for accountability purposes. In order for the proposal to be more appealing to the community leaders, Juan suggested that we reserve two spots for girls from the district that they represent. There are still little towns within the district without access to high school. The reason that this politicking was necessary is that we’re renting the building for next to nothing. We’ll be paying 100 soles, or a little over 30 dollars, per month. I was scared that the vice-president would see that we are gringos with macbooks and want more for the space. In fact, the vice-president seemed to be very interested in the project and eager to sign the contract.
Now we have a building. It’s the first step among many that still need to come. But it felt damn good to walk out of that office with the assurance that for the next two years we have a space we can use at a price we can afford.