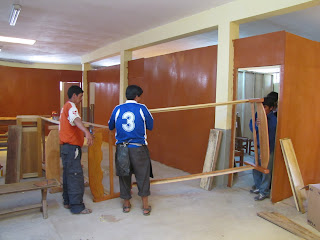 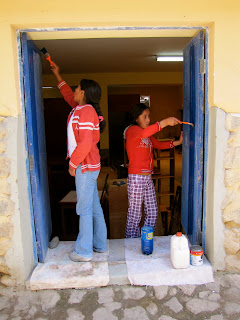 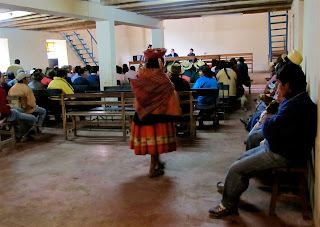 Faena, as it is know in the Sacred Valley, has no direct translation to English. It comes from the rich Incan tradition of communal labor. Schools, rural communities, community associations all require faenas. These faenas are used to improve water supplies, maintain communal land and build community buildings. On Sunday, the Wachay Wasi dormitory held its first faena and it was a great success! Five fathers and one mother who journeyed down to town Sunday morning to paint the walls, put together the beds and clean and arrange the dormitory. In one day we witnessed a dramatic change in the dormitory and we encouraged about the families´ commitment to the project. The sight of all the families working together for the collective good of their daughters was both satisfying and inspiring. Below are some pictures of the event.

Also, earlier that same morning we participated in the general assembly of the Communidad Campesina Ollantay, the community organization from which we rent our building. At start the meeting, about 200 people sat in rows and listed semi-attentively to their elected officials list the issues that would be addressed during the assembly. The dorm was first. The majority of the meeting was conducted in Quechua, so I did my best to listen for my name or Spanish words that would indicate that it was my turn to speak. It wasn’t until I got up on stage that I realized how intimidating a setting it was. My thick gringo accent and quivering voice made me wonder if anyone would be able to understand me, especially the older women many of whom still struggle with Spanish. I brutally spat out semi-developed concepts of community involvement and transparency before I handed off the mic and embarked on the long journey back to my seat in the last row.

We are set to open the dormitory with a big inauguration party this Sunday. We are frantically trying to get everything together. The biggest challenge that we are facing at this point (and it’s a massive one) is the selection of a house mother. We put the word out about the position and have gotten a very strong response. It is a very delicate process and has caused some tension within the board. It is another difficult decision that will make or break the success of this project, and because almost all of the candidates are from the central community it even more difficult to turn them down. I just hope we can find the right person for the job without causing too much friction between the women and their respective families. Either way, I am really glad that Bianca will be here to see us through in these first few months and I am really excited and anxious about Sunday and the girl´s official arrival to the Albergue.