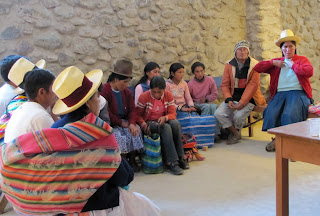 In Ollanta on a dismal and sodden morning. Today marks the third day of March and consequently the first day of school in Ollantaytambo. The rains continue and the newspaper reports ‘Otra Tragedia’ as the Quesermayo River inundates the Pisac region leaving seven dead in Taray and hundreds more without shelter. That’s a mere hour and a half upstream from where we reside, and daily I’m thankful that the town of Ollantaytambo is located at a higher elevation.

On the last day of February we had a reunion with the six girls and their families. A simple exercise in bureaucracy and law. More concretely, the point of the reunion was simply to go over our contract of consent, a liability waiver that covered every possible incident from expulsion to doctor’s appointments, pregnancy and death. A document that we as foreigners are well accustomed to since we’ve surely signed our lives away an unimaginable quantity of times for every and any activity conceivable. Death by ceramics isn’t an impossibility in the States. Nor are death by tennis ball, by golf club, by cello.

But as we read the form of consent aloud, the girls’ faces contorted, muddled and steadily plummeted to the ground. It was a cold yet necessary document, and we tried to divert the dismay and precaution by avowing that we too would do everything possible to create a safe and nurturing environment. When all was said and done, I thought that we might have some separatists, but perhaps more predictability, each family lined up to sign the paperwork, or, in lieu of, to leave an impression of their index finger.

The girls themselves are six in number reigning from four separate communities: Socma, Rapcca, Pallata and Camicancha. Our dormitory unit shall consist of Maria-Elena, Nohemi, Janet, Jessica, Dina and Katherine, the former three whom will attend school in Urubamba, and the latter three who will study in Ollantaytambo. 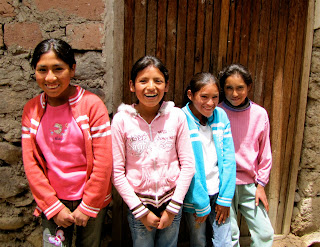 With this milestone, however, comes the sound yet daunting program decision that I shall act as ama de casa (house mother) for the first few months whilst we locate an educated and suitable candidate from the local community. As the ama de casa will act as the backbone of the program, this is a decision we cannot afford to rush. Nor is the concept of hiring a woman and telling her to do her job when we have no clear notion of what that job entails a sane methodology. I expected the families to have some sort of objection to my acting as ama, or in the very least to be wary, and to demand of me concrete evidence of my experience and background. But the general response proved to be a nod in my direction and a few escaping giggles from the girls. I welcome the challenge as any in life, and am ecstatic at the opportunity of getting to know and understand these girls as intricate individuals.

Lisandro cast an adamant promise that I would write more about each girl individually today, but all I can aver is that as I get to know them better, so will you.