In briefing, the inauguration was a success. 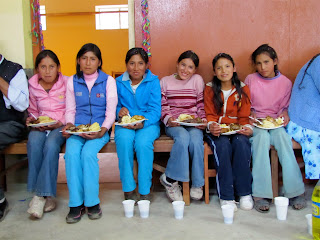 Our six families arrived early in the morning to help prepare the inaugural feast and to get their daughters situated for their first daunting evening in the dormitory. Throughout the morning, mothers busied themselves gutting the cuyes and cleaning the house, fathers readied the ovens and the girls decorated the dorm with serpentinas and flowers. The ceremony was set for one in the afternoon, so naturally, people started to trickle in at three. The radio boasted the best of huayno, the chicha infused with strawberries and delicious, and the people steadily gaining momentum and vigor. 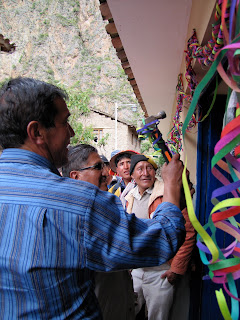 I’ve attended five prior inaugurations in the Sacred Valley, so to a great extent I knew what to expect. The tardiness was essential and was naturally followed by a circular congregation marked by a myriad of speeches, the formal inauguration of the building by smashing a champagne bottle hung over the entrance, an inaugural toast of mini pisco sours, and a true feast of cuy, chicken, papas, choclo and spaghetti.

The attendees came from a slew of communities, and included the President and Vice-President of the Indigenous Community of Ollanta, the community President of Huilloc, Ollanta’s school director, English teachers from Urubamba, a vivacious Brazilian couple living in Rumira, volunteers from the valley, and a slew of friends that we’ve made and who have aided us along the way. At the moment, there was so much anticipation in regards to the event and what would ensue that I barely had a moment to entertain the notion of what was happening. Today, and as I write this blog, I’m filled with honor, with pride, and with a pressing urge to cry. 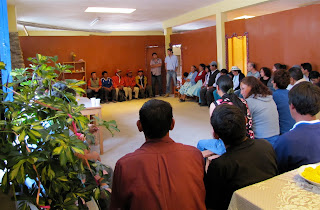 After the inauguration, a party ensued, and while the chicha was tempting, work had already begun. The girls had homework to finish, showers to take and packs to ready for the upcoming school day. I’ve spent two nights in the dormitory with the girls, and the excitement of being in a new home has not yet abated. Our first evening together, I asked the girls what time they normally went to bed and subsequently woke up in the morning. The general response was that a typical bedtime was from seven to eight in the evening with some girls rising as early as three in the morning. Our first night, giggles and fright impeded the eight o’clock bedtime, and the girls finally managed to fight off the exhilaration and fall asleep at ten. This delay was in a large part owing to the thrill of the shower. I nearly had to shut the water key to coax them out of the bathrooms.
We’ve been waking up at five am daily, which constitutes sleeping in for these ladies, and often I find that they’ve slept in the same bed together. Surely, some things will take getting used to, but as a whole, this dorm has been emphatically filled with smiles.

This week’s projects include painting names on each girl’s door, a photo and mini bio writing session so that you can get to know these six individuals better, volleyball, an English class and a potential hike to the surrounding ruins. We’re thrilled!