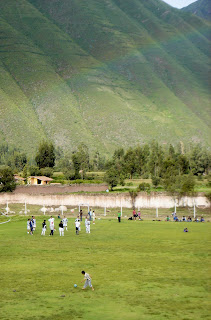 Yesterday Alex and I spent the afternoon playing pick up soccer with a group of guys who get together most days. It felt good to have an afternoon off from working on the dormitory, but it also felt productive. A big part of working in a town like Ollantaytambo is getting to know the community and, as much as possible, becoming part of it. Like the afternoon I spent drinking chicha – a fermented corn drink – at the chicheria next door to the dormitory. All the men bought me a round and I returned the favor. I left tipsy and having made a connection with a group of people who would be watching the dorm’s development, and inevitably judging it.
I am amazed daily by Alex’s connection to the people of the town. Almost every time he walks down the street he stops to talk to someone. In a large part it’s soccer. Alex is in the process of picking which town team he’s going to play for. He’s already scrimmaged with one of them. Sometimes I think my poor ball control and shoddy footwork is a real detriment to my community standing. Bianca too has built a little community of women that she’s friends with. She is also able to make immediate connections with the girls that we meet with. As a result, when we present our project at this Saturday’s open meeting for the community, many people will already know who we are and what we’re about.
Update: The walls are pretty much up. The contractor we hired has been working hard and I’m going to buy him a lot of chicha when he finishes today or tomorrow. The electrical company and bank, however, won’t get any chicha. The electrical company keeps setting dates to install power and then not showing up. The bank rejected a money transfer and then charged us for it anyway. Things like that are frustrating but inevitable, right?
We are aiming to open the dorm March 15th, and I’m optimistic that we can do it. Today, Bianca and Alex are in Cusco buying furniture. We still need to introduce you to the dorm’s future inhabitants. We had a great meeting this weekend with all the families. We discussed how the dorm will be run and had the parents sign releases for their daughters. The girls seemed excited, but shy. Bianca promises to introduce each one in tomorrow’s entry. I can’t wait to read it, Bianca.